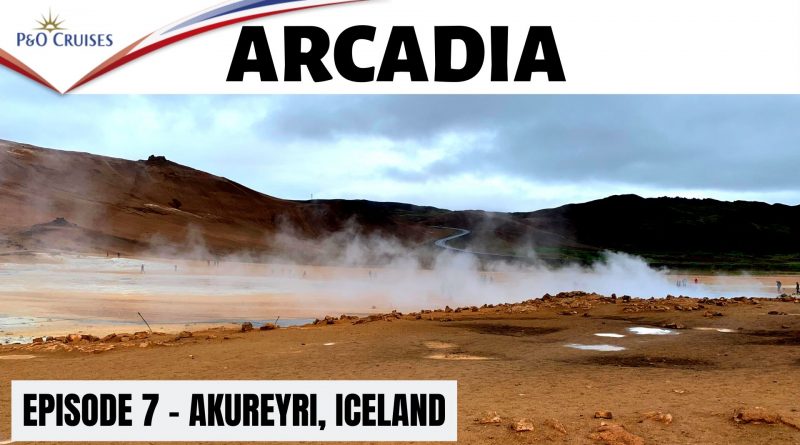 During our 14 Night P&O Arcadia cruise, we visited the port of Akureyri in Iceland

You can also  watch this at https://www.youtube.com/watch?v=SLL4sdBGceE.

Akureyri, a city in northern Iceland surrounded by mountains and was our first Icelandic port of call.

Our day in Akureyri

We booked an excursion through Iceland Guided Tours https://www.igtours.is to Lake Myvatn and Godafoss waterfall – we had a very knowledgeable guide and thoroughly enjoyed our trip.

It was an amazing day and included visits to:
Goðafoss (Godafoss) – “Waterfall of the Gods”. One of the most spectacular waterfalls in Iceland.  Its name derives from the year 1000 when Christianity was made the official religion of Iceland.

Námaskarð (Námaskard) – old sulfur mines & hot springs which looks like nothing we’ve ever seen. The landscape is extraordinary and you could imagine yourself walking on another planet.

Jarðböðin – Mývatn Nature Baths – The Blue Lagoon of the north

Grjotagja – A lava cave once used by locals to bathe in before it became too hot.

Yay! We made it on to foreign soil for the first t

Do enjoy the pools when cruising? See if you can s

This was us enjoying our sea day on Regal Princess

Partners in crime! 😛🥰👬 Now get us back o

⭐️ New Vlog ⭐️ The first episode from our

Love a summer evening on a cruise and seeing the s

This is why we love a balcony. Perfection 👌 Tak

On which @princesscruises ship would we find this

Funky reflections looking from the atrium towards

We love exploring a ship at night, this was #Regal

We are craving some food from The Salty Dog Grill

When it comes to cruises you can’t get more Brit

Exploring the ship last night to walk off our huge

We’re on the first Princess Cruises ship to leav