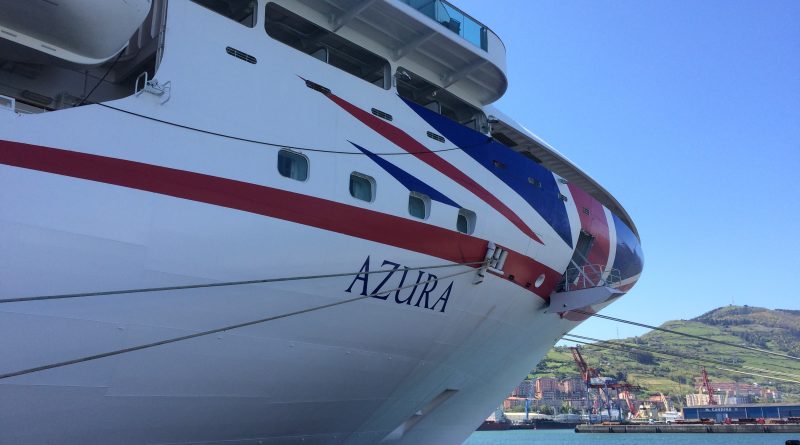 Firstly, I have to mention the video for this cruise, it’s a long one, but our best so far. It starts with a tour of our Inside cabin followed by a full tour of the ship. We also include footage of what we got up to in each port – take a look at it here: https://youtu.be/LH_ID2xQcEc

We cancelled the QM2 to go on Azura, had we done the right thing? 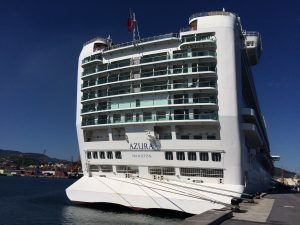 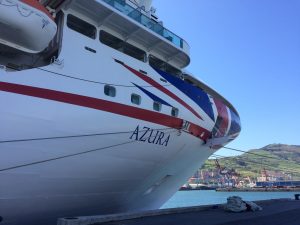 In December we were onboard Cunard Queen Victoria (check out our review here), we found the prices quite high mainly because of the exchange rate, when we came back we found a cracking deal on Azura for 7 nights that was only £150 more than a 2 night cruise we had already booked on QM2 – so we cancelled the QM2 cruise and booked Azura… Had we done the right thing?

Traffic was kind and we arrived in Southampton an hour and half early.

We parked our car with CPS and then made our way in to Mayflower terminal. It was really busy, mostly standing room only but within 15 minutes we were on our way to check-in, security was straightforward and I would say we were on the ship within 30 minutes of arriving which is better than we had expected being so early. 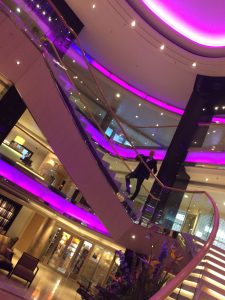 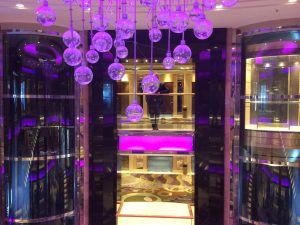 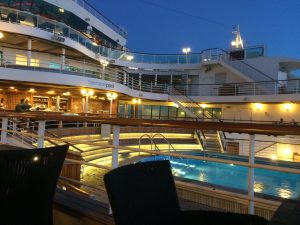 Boarding the ship we immediately noticed how clean and smart she looked, we dodged the ship photographers as we didn’t need another photo and wanted to dump our hand luggage and get exploring.

We had booked the lowest grade inside as a guarantee and ended up getting upgraded to B329 which was great! When I say upgraded I mean within the same grade, so it was a better inside as it was more mid ship and lower.

The cabin itself felt more specious than expected, came with the usual free bottles of water and tea and coffee making facilities. 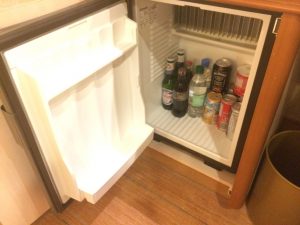 There was a mini bar in the fridge which we didn’t use as we bought our own but noted the prices were the same as the bars so that’s convenient and your not paying extra for it.

Our cabin steward was amazing, really friendly and nothing was too much. We requested wine glasses and he made sure they were replaced daily or when he made the room up. He also noticed we had taken a couple of green tea bags from the buffet – so provided us with a full box of green tea without having to ask, small touches make the difference.

The room was serviced in the morning once we left and then turned down while at dinner – a chocolate and Horizon magazine detailing the following days activities were also left on the bed.

There was ample storage and the bathroom as you expect. You could review your account on the TV which was good, but in general the TV was slow and clunky.

We kept the air con on the lowest setting and this kept the room nice and cool.

No problems with noise other than when people forgot to close their cabin door and instead left them slam shut – will confess we did this a few times when we forgot how heavy the doors are. 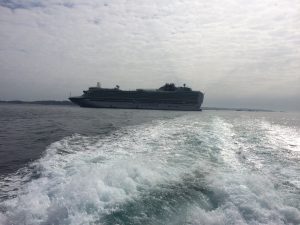 We had freedom dining in the Peninsular restaurant. We dinned here 3 times in total.

On the first night we went down about 8pm and were given a pager, this appeared to bleep intermittently and never went off to notify us; so we went back 45 minutes later and there was a table ready.

On the first night we both had the prawn cocktail, Luke had the pan fried chicken breast and myself the sirloin steak, both excellent. We finished off with sticky toffee pudding and a selection of cheese. 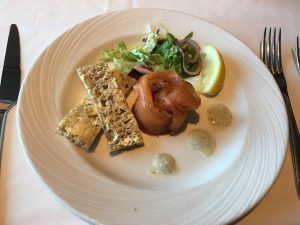 Similar issues the following night with the pager, this time it kept telling us we were out of reach even though we were nearby.

So we returned about 30 minutes later and our table was ready. Tonight was Marco’s Menu (Black tie night).

We went for the Smoked Duck Breast as a starter, Grilled Calves Liver, Kidney and Choritzo Brochette and Roast Salmon and Prawns for mains followed by a cheese board.

We skipped some courses as we did not want to over eat. Food quality and taste were excellent.

Night 3 we spent at the Glasshouse, the Sturf and Turf, Cassoulet, Tempura battered prawns and Quail scotch eggs were amazing. We had this meal with a flight of wine each. The small platters were about £5 and the surf and turf was about £7. 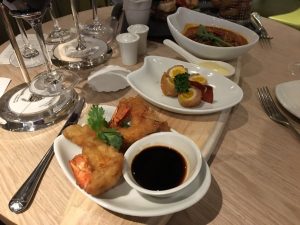 Not sure what we thought about the layout of this Glasshouse – I think we preferred the one on Ventura or Britannia.
The great thing about the Glasshouse is each wine is available by the glass and something we learnt speaking to the head sommelier on Britannia was if you are not sure you can ask for a free taster glass, it’s just a sip sized glass but enough to check you like what you are about to buy.

We love the Glasshouse concept and Azura didn’t disappoint, just not sure if it was the best layout.

Night 4 we spent at Atul Kochhar ‘s Sindu. We recommend not eating too much the day you come here as you will leave stuffed. Here we had the prawns, crab, beef fillet, Atul’s signature dish followed by chocolate pudding. The food tasted superb and the service top notch. The cover charge was £20 and well worth it. 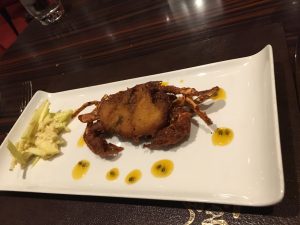 Night 5 we were back at the Glasshouse. We shared 3 small plates of Roulade of duck, tempura prawns and Quail scotch eggs. As our mains we had the Sliders and Guinnie fowl pie, finished off with a cheeseboard. With 2 glasses of wine this came to about £30, well worth it for a very satisfying meal.

Night 6 we spent in the Peninsular dining room, we arrived about 6:15 and were directed to a table for 2. We got in early tonight to make sure we saw the Chefs parade, a great P&O tradition. Tonight the food was fab, I didn’t note what we had eaten though sorry. 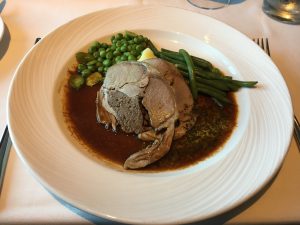 On the final night we went to The Beach House. This is an area of the buffet that is sectioned off and where you have table service with a delicious looking menu. The dress code is more relaxed here and it seemed popular the night we were there. The cover charge is £7.50 but there is additional charge for some items. I had the Steak on a hot stone – very smokey when it appeared but as I like my steak rare, I removed it from the stone and cooked small pieces as I wanted them. I have to say the steak was very tasty indeed. Luke had the seafood skewer, a fishy selection on a hanging skewer, also very tasty. 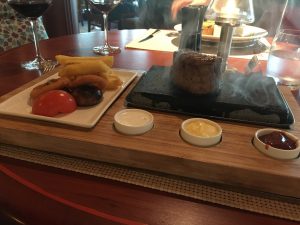 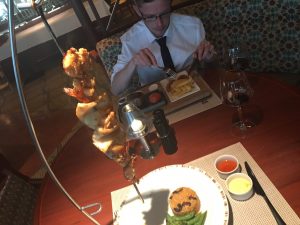 We had a surprise at desert, we were not expecting anything much but Luke’s turned in to a show, with it being plated up at the table and a ball of fire poured over it!

Recommend trying the Beach house, it was our first time but we will go back again.

Note, the select dining venues have two menus, A and B, they changed midweek so on our cruise you could go twice and have different menus if you wanted to.

As you can tell by the length of this section, we liked the food… A lot!

We spend quite a bit of time in the bars working our way through the gin and cocktail menu. There were some special 180 year celebration drinks in the menu which were nice.

The Benares at Sindu was a favourite of ours. 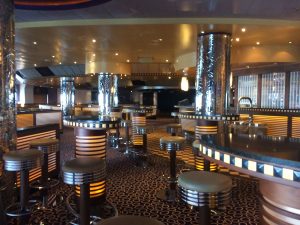 Azura has a number of bars, from the local style pub (Brodie’s), the Planet bar that has huge TVs on the wall showing sights from across the world and if you want to dance the night away there is Manhattan.

I also have to mention the Glasshouse again – this has to be our favourite place onboard Azura.

I will go in to more detail on each port in future blogs, so here is a brief overview:

We took the free shuttle bus in to town – having pre booked the Aquarium, we headed straight there,  We must have spent about 2 hours looking around this fabulous attraction – well worth a visit. After this we had a walk around before joining the queue for the shuttle bus back to the ship.

Visit our port guide for La Rochelle at https://cruisemonkeys.com/la-rochelle-on-our-own

Bilbao is a very clean city, having taken the free shuttle we found our way to the Guggenheim museum, we didn’t go in but instead appreciated it from outside.  We had a photo by the giant topiary dog before then walking along the river to the funicular railway.  From the view point you could see all of Bilbo – spectacular views!

We had a walk around the marina and then explored the beach – there was no shuttle needed here.  In hindsight, I think we should have booked an excursion to make more out of this port of call.

We love going on a tender, so were in our element when it came to St Peters port.  We had a little wander around the town and sat down to watch all the boats coming and going while enjoying some Guernsey ice cream. Yum!

So to conclude, as I’m sure you can tell, we had a fab time on Azura – she is a fab ship and would suit couples like us or families alike, we will be back! 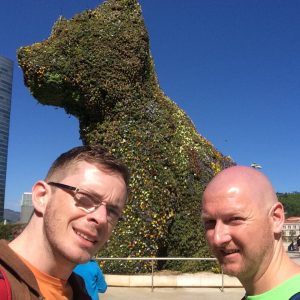 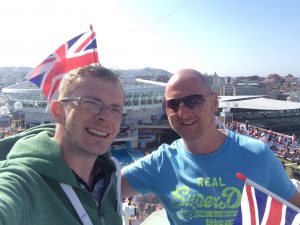 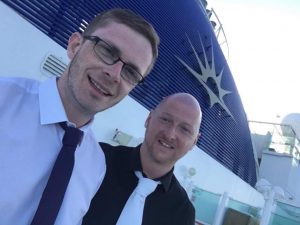 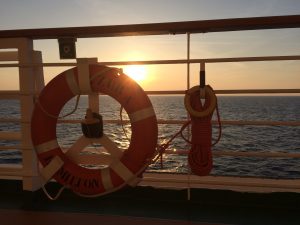